Some people use camomile tea, others use breathing exercises, but, for me, the most reliable tactic for getting to sleep quickly is to avoid screens before bed. Yet, actually doing so requires some creativity if I want to keep up with news online. My current system involves saving articles to the read-later Instapaper app, which sends a daily digest to my Kindle each evening. But it’s a hacky approach where articles often aren’t formatted properly and sometimes don’t appear at all.

I could switch to a Kobo, which offers native integration with rival read-later app Pocket, but the Onyx Boox Nova Air C offers a much more tantalizing alternative. Unlike either a Kindle or Kobo, its E Ink display is capable of showing colors, and it’s running a modified version of Android that allows you to download and run a variety of apps that go far beyond reading ebooks. It opens the door to numerous read-later apps as well as full-on word processors and third-party note-taking software. It even includes a stylus for handwritten notes.

At $420, it’s pricey compared to Amazon’s Kindles, which often cost well under the $200 mark. But that price gets you something closer to a full-on Android tablet than an e-reader. It’s just a shame that the total package doesn’t fully deliver on the promise. 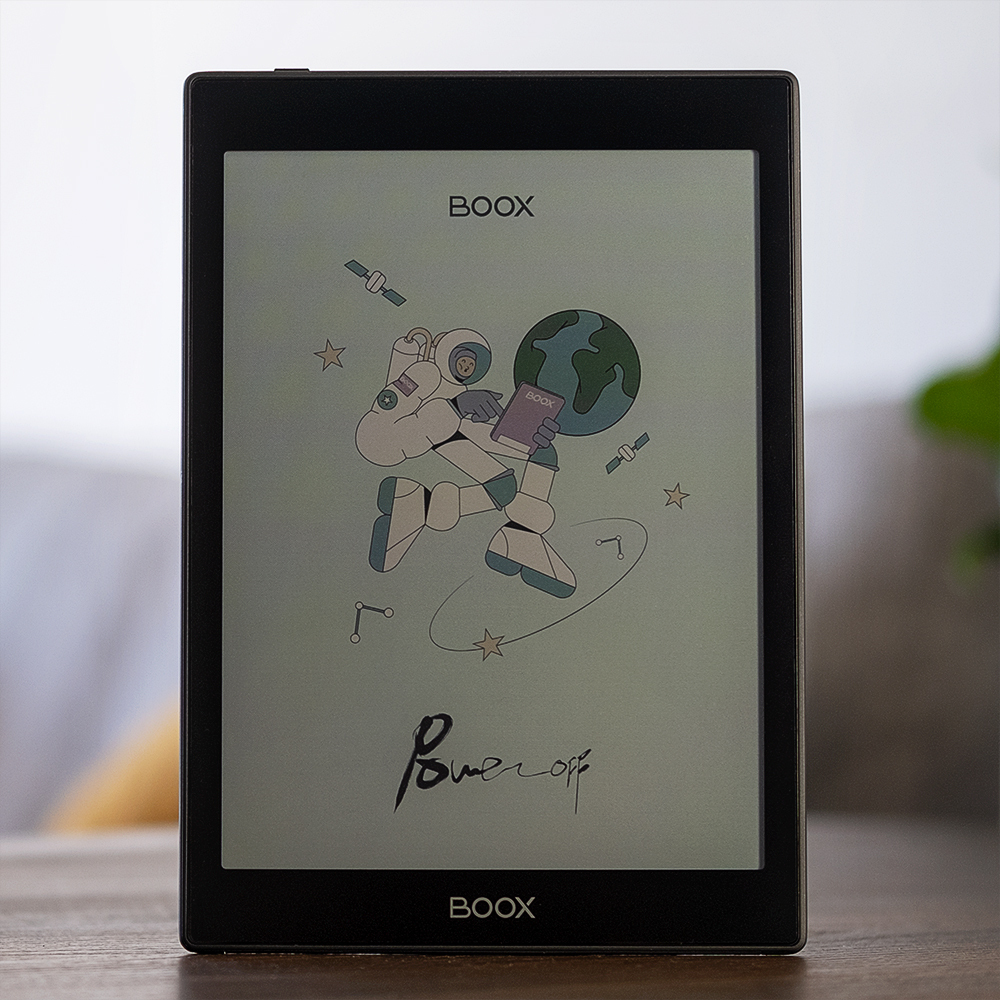 The Onyx Boox Nova Air C is an unassuming device, with big bezels around its 7.8-inch screen and a generally plastic-feeling construction. Its power button is on the top left, while a USB-C port is on the bottom alongside a pair of downward-firing speakers. They’re roughly as bad as I expected them to be, but it’s better than nothing. (Amazon’s Kindles haven’t included them for years.) Internally, the Nova Air C is powered by a Qualcomm Snapdragon 662 processor with 3GB of RAM and 32GB of storage.

The main attraction here is the color E Ink display. The Nova Air C is equipped with E Ink’s Kaleido Plus screen, which uses a color filter layer on top of a more typical E Ink panel to offer 4,096 colors. The approach comes with some obvious drawbacks. For starters, the screen can’t display color content with the same resolution as black and white, so while the display reaches 1404 x 1872 in black and white (300ppi), it’s limited to a paltry 468 x 624 (100ppi) when showing color . And even then, the colors are far more muted than what you’d get from even a cheap LCD panel, whose range of colors can be counted in the millions — not the thousands. My former colleague Sam Byford described the colors on the similar Kaleido-equipped PocketBook Color as like “a newspaper that’s faded over a few days,” which felt like a very apt description of the Nova Air C.

And yet, even basic color is better than no color at all. The Nova Air C’s colors might look washed out and low resolution, but the essence of the image remains — unlike on a Kindle, where color imagery just looks broken. I’d almost liked using the Kaleido screen to watch a foreign movie with subtitles; you miss out on a lot of the subtlety, but you can still fundamentally understand what you’re looking at.

I briefly tried watching video on the Nova Air C’s screen via YouTube, but I wouldn’t recommend it. Content looks incredibly juddery thanks to the screen’s low refresh rate, colors look washed out, and there’s a huge amount of ghosting. You can see what’s going on in a pinch, but I’d rather watch video on literally any other screen.

Despite the color, the tablet retains the benefits of an E Ink display. I had no issue reading the Nova Air C in bright sunlight, and, with a small boost to its screen illumination feature, I was also able to read it in low light before bed with no eye strain. Battery life is also as impressive as any other e-reader. I’ve been using the tablet on and off for the better part of two months, and its battery level is still sitting at 55 percent.

That said, part of the reason for this impressive life is likely to be the Nova Air C’s aggressive power management settings, which, by default, see the tablet fully shut down if you don’t use it for just 15 minutes. This can mean waiting around 27 seconds for the tablet to boot up every time you want to use it. I’d suggest adjusting the “Power-off timeout” in settings to one or even two days, which will allow the laptop to wake up in a couple of seconds when you want to use it. But be prepared to sacrifice a little battery life for this increase in responsiveness.

The highlight of the Onyx Boox Nova Air C is its built-in note-taking app. Handwriting notes feels great with the included stylus, with pen strokes appearing on the screen near-instantaneously and 4,096 levels of pressure sensitivity that offer a lot of versatility. There are a variety of different brush styles and colors, and the software can attempt to transcribe your handwriting into typed text and even emoji.

This character recognition worked okay in limited cases but struggled with lengthy passages. Once written, it’s easy to export notes to a PDF or PNG file by simply scanning a QR code with your smartphone or sharing them to another app on the tablet. It all makes the Nova Air C a great device for taking notes by hand.

DRM’d ebooks are a no-go

But trying to use the tablet like a traditional e-reader is more complicated, and you’ll have to jump through more hoops than on competing devices like the Kindle. Although the Nova Air C technically comes with a built-in “Store,” in practice it seemed to be filled mainly with public domain works, and I couldn’t find any of the modern books I was hoping to read.

That leaves you with a couple of other options. You can download ebooks from elsewhere on the internet and then transfer them to the tablet, and it supports a good range of filetypes, including PDF, ePub, TXT, RTF, and MOBI. But, when I actually purchased an ePUB from eBooks.com and tried to load it onto the Nova Air C, I discovered that it doesn’t support the Adobe DRM the store uses. (The only DRM the e-reader supports is the Chinese-focused JD DRM.)

Thankfully, Onyx is using a heavily modified version of Android 11 as software on the Nova Air C, which means you’re not limited to using its built-in software. You can download and install most apps from the Play Store as though you were using any other Android tablet, including, crucially, Amazon’s Kindle app. Getting Google Play Services set up on the device is a bit of a weird process that requires you to hop through a couple of strange hoops. But, once I was set up, it was relatively easy to benefit from my preexisting Kindle library. While I was there, I downloaded a couple of other Android apps: Instapaper for reading all the web articles I bookmark for reading later throughout the course of my day; Obsidian for note-taking; and Comixology for reading comics.

This is what I was hoping would be the Nova Air C’s superpower: the ability to download and install whatever Android apps I wanted.

Take note-taking. The Nova Air 2 comes with a decent note-taking app that works very well with the stylus. But it works less well for typed notes, which you might want to do if you have a Bluetooth keyboard to pair with the tablet.

So, instead, I downloaded the note-taking app Obsidian. It worked well, allowing me to type up notes far faster than I could ever handwrite them. And, unlike when using a laptop or my phone, I could happily do so late at night without having to look at a bright screen. You could use whatever word processing or note-taking software takes your fancy — so long as it has an Android app. It’s also possible to download alternative stylus-compatible apps, but my experience was a bit hit and miss. OneNote worked well, but INKredible felt laggy with Onyx’s stylus.

Many apps work with little trouble

I was also able to get Instapaper up and running with minimal hassle. I had full access to all my saved articles ready for me to read without having to go through the clunky sync process that Instapaper’s Kindle integration requires. Comixology worked okay for reading comics, but the screen was just slightly too low in resolution and small for it to feel like I was getting the most of the experience.

But, very quickly, I started encountering issues with these apps that had obviously never been designed with E Ink screens in mind. You control apps on the Nova Air C with a combination of taps and swipes, same as you would on any other Android tablet. But its E Ink screen is so much less responsive than the 60Hz LCD or OLED panels found in most other Android devices that it’s hard to “feel” your way around each app. You can’t half-swipe to check what a full swipe might do; you have to fully commit and hope you got it right.

Things feel a lot better when you start using physical buttons to control the tablet, which is made possible via Onyx’s magnetic Nova Air case. This not only adds a protective cover to the tablet but also includes a pair of physical volume buttons, which many reading-focused Android apps will let you remap into page-turning controls. If you’re going to pick up a Nova Air C, I’d strongly recommend getting this case for it. It’s sold separately from the tablet for $59.99, which feels expensive given how necessary it is.

I had very high hopes for the Onyx Boox Nova Air C. I wanted it to be able to do it all: read books; read online articles; and act as a repository for all my notes — all in a form factor that I could happily use late at night without eye strain.

And, yes, it can absolutely do all of these things. But the more I asked of the tablet, the more I could feel its E Ink screen creaking under the pressure. E Ink panels are more than responsive enough for reading books using software designed specifically with them in mind. But throw in an app designed for a 60Hz touchscreen, and it can be a struggle to use. And packing in this much functionality means that the Nova Air C struggles to match a simple Kindle when it comes to simply being able to flip it open and immediately start reading. You have to choose the app, and possibly even the book, first.

I wanted a lot from the Nova Air C, and at $450, I think it’s reasonable to expect it. Amazon’s Kindles cost roughly half of what Onyx is asking, and you can even get an alternative e-reader with a color screen from PocketBook for $234. Or, if your priorities are less about having an E Ink screen and more about having the functionality of a tablet, you could get an iPad Mini with an 8.3-inch screen for $499 or a base level iPad with a 10.2-inch screen for $329 . None of these devices will tick all the boxes. But, then again, neither does the Nova Air C.

Photography by Jon Porter / The Verge