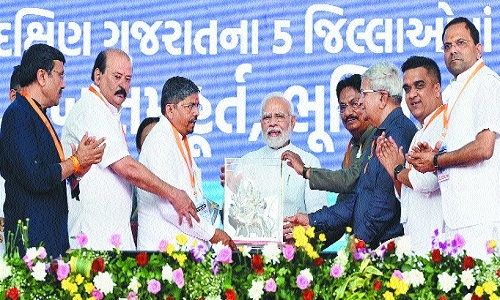 He was speaking during a function held after the inauguration of AM Naik Healthcare Complex and Nirali Multi-specialty Hospital built near Navsari town of Gujarat by a trust headed by AM Naik, group chairman of engineering conglomerate Larsen & Toubro.

The Modi-led NDA Government completed eight years in office on May 30. Referring to some pro-poor healthcare schemes launched in Gujarat by him when he was the Chief Minister, Modi said his experience as the head of the State helped him in shaping the health care policy of the country. “I had introduced the Mukhyamantri Amrutam scheme, which provides free health cover up to Rs two lakh to the poor citizens. Later, when I became the PM, I introduced the Ayushman Bharat scheme in the country, which provides free treatment up to Rs five lakh,” Modi said.

Nearly 40 lakh persons, mostly women, have availed the benefit of this central scheme in Gujarat so far, the Prime Minister said, adding that the State has achieved new milestones in the healthcare sector in the last 20 years.

Those who ruled country for long never gave priority to development of tribal areas: PM Modi targets Cong: PRIME Minister Narendra Modi on Friday attacked the Congress, saying that those who were in power in the country for a long time post-Independence, never gave priority to the development of tribal areas as it required hard work.

Addressing the Gujarat Gaurav Abhiyan rally in Khudvel village located in tribal-dominated Navsari district of the state, Modi said he does not launch development works to get votes or to win elections, but he does so with the intention of improving the lives of people.

Assembly polls in Gujarat, Modi’s home state, are scheduled by the end of this year, where the ruling BJP seeks to retain power. On the occasion, the Prime Minister either inaugurated or laid the foundation stone for various projects worth Rs 3,050 crore for the tribal region.